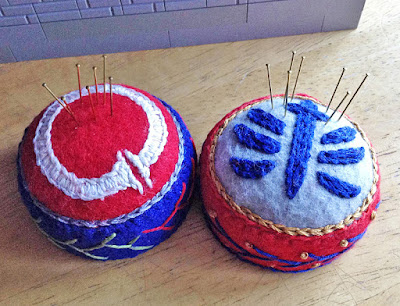 NOTE! I'm moving old content from my other blog to this one. These Dragon Age posts originally appeared the week before Dragon Age Inquisition released in November of 2014. I intend to post occasional fandom related entries here, might as well keep all my geekdoms together.


Dragon Age Inquisition is almost here! The third installment of the popular Bioware series releases on Tuesday, November 18th in North America, and Thursday, November 20th for Europe and the UK. It will be available on PS3, XBOX 360, PS4, XBOX1 and PC. To celebrate, I will be publishing a week of Dragon Age posts to countdown to the big day!

If you've played the Dragon Age series you know that one of the major conflicts is the Mages vs Templars. You were forced to pick a side in Dragon Age 2, and as Dragon Age Inquisition opens we discover that mages and templars are involved in an all out war with each other. At Haven, a peace conference has been called to try and halt the conflict, but if you've seen even one trailer, you know it doesn't go well! I thought it would be fun to make a pair of pincushions with the symbols of the Circle of Magi and the Templars. Think of them as both therapeutic and useful - stick pins in your least favorite!


I used the bottom of two watchmaker tins for the base, these are about 2 inches in diameter. You could use large bottlecaps, or tiny ones, tins, flat food containers, whatever you can find that might work for you. You'll also need some felt in your chosen colors, embroidery floss, scissors, fiberfill for stuffing, needles and strong thread. I started by embroidering the two designs onto felt, making sure they would fit on the tin.

Next, trace around your base, and cut out a circle for the bottom. Then, cut a strip of felt that will go around the side - make this about 1/4 inch taller than the height of the side of the container. Using a whip stitch, start by sewing the side piece together, making it a tight fit around the container. Then tuck the loop onto the tin with the thread on the bottom, because now you'll use that thread to sew on the circle for the bottom of the pincushion - use a blanket or buttonhole stitch.

I used the top of my frappuccino cup to trace the circle for the stuffed part. It's about 4 inches across and had the added bonus of being clear so I could position the embroidery properly!  Cut that out, thread a length of strong thread (I broke regular thread on the first attempt) - color doesn't matter and baste around the edge. Grab your stuffing, and gather the two threads so the felt circle becomes like a pouch. Stuff as much fill as needed - I poked some with a pencil to help smooth out the design and get more into it. Then tie off the threads. Tuck it into the base and use a blanket stitch to attach to the felt covering the tin.

The last and most fun part is adding some decorative embroidery to your pincushions. I used gold accents for the templars, chain stitch, feather stitch and some French knots. And for the mages I used silver accents, chain stitch and four colors of feather stitch for the different schools of magic: spirit, creation, entropy and primal. Just use Google or YouTube if you need to learn how to do any of the stitches.

These pincushions are pretty easy to make - felt is very forgiving, fun and would make great stocking stuffers for your favorite Dragon Age fan! Now... which one are you going to stick the pins in? Will you support the Mages? Or the Templars? Let me know in the comments!

PS. I know that the Circle symbol doesn't entirely work as a symbol for the mages, but I went with it anyhow. Perhaps my choice is clear!