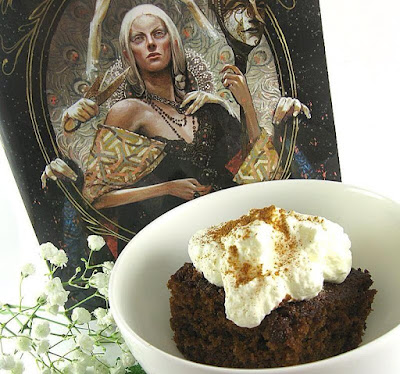 In Dragon Age: Inquisition we will have the opportunity to explore both the Kingdom of Ferelden in southeast Thedas, and the Empire of Orlais, in the southwest. Orlais is ruled by Empress Celene, and famed for its rich culture and extravagance.

In the wonderfully crafted Dragon Age novel The Masked Empire by Bioware writer Patrick Weekes, the Empress sips some tea early in the book...

"It was an excellent tea, a Rivaini blend of cinnamon, ginger and cloves, sweetened with honey just as Celene liked."

Cinnamon, ginger and cloves are one of my favorite flavor combinations, especially for this time of year, and so I present a recipe for Rivaini Spice Cake with Whisky Infused Cream! This is an easy cake to make, and if you skip the Whisky infused cream (but why would you?) it's a non-sticky dessert that's possible to eat while gaming. It's great to pack for lunches, and keeps for a week though my family will down it in about two days. I will be baking one the night before Dragon Age releases, because it's also yummy for breakfast!


What will you be eating when Inquisition releases? Stay tuned for ideas of quick and easy snacks, and my version of The Hanged Man Stew - crockpot style, so you can get back to gaming! Tomorrow though, we celebrate the Dragon Age Keep...


(These Dragon Age posts originally appeared the week before Dragon Age Inquisition released in November of 2014 on my old blog. I've moved them here so I can keep all my geekdoms in one place.)
Posted by Wild Mama at 11:23 AM